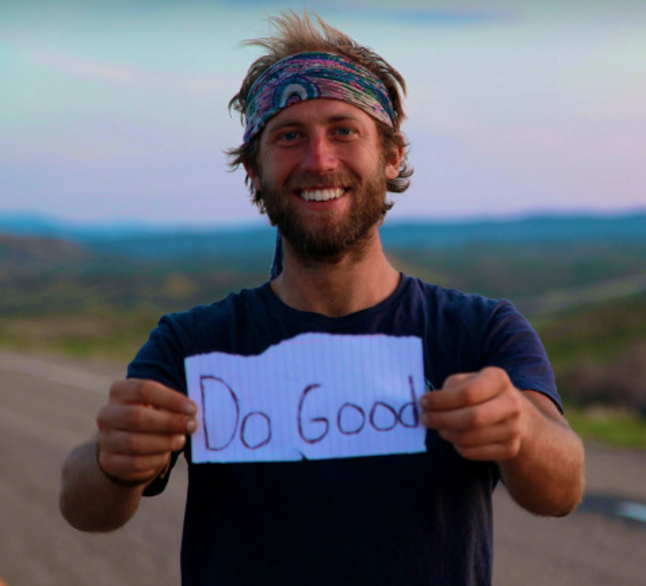 Rob with his 111 possessions.

How far would you go to educate people about sustainable living?

Rob Greenfield, aka the “Dude Making a Difference”, seems to be up for anything!

Whether it’s riding a bamboo bicycle across the United States (twice); living in a tiny home; dumpster diving; or wandering solo into the jungles of Southeast Asia, his simple and minimalist adventures inspire others to be a part of the solution.

I was thrilled when Rob agreed to be a guest on the podcast to share his story as well as tips for living a more sustainable life.

Rob is a light-hearted, interesting young guy filled with the kind of passion the world needs right now.

It’s tough to change things for the better if you don’t really know what’s wrong with the way things are.  Rob’s adventures, which he documents and shares on social media, serve to educate people about how their daily choices can have a positive or negative effect on other humans and Mother Earth.

Rob biked across the U.S. twice to educate folks about sustainable living.

For instance, did you know that a large percentage of U.S. citizens live in what’s known as a “food desert?”

If you’re not sure what a food desert is, well, you are exactly the type of person that Rob is trying to reach!

According to Wikipedia, a food desert is “a geographic area where affordable and nutritious food is alleged to be hard to obtain, particularly for those without access to an automobile.”  Rob defines the term based on his own first-hand experience making it crystal clear why it’s such an important issue.

Recently, Rob launched a video series that details some of the most important lessons he’s learned during his adventures. The four videos take on the topics of food, waste, water and transportation. You can view his introduction to the series below.