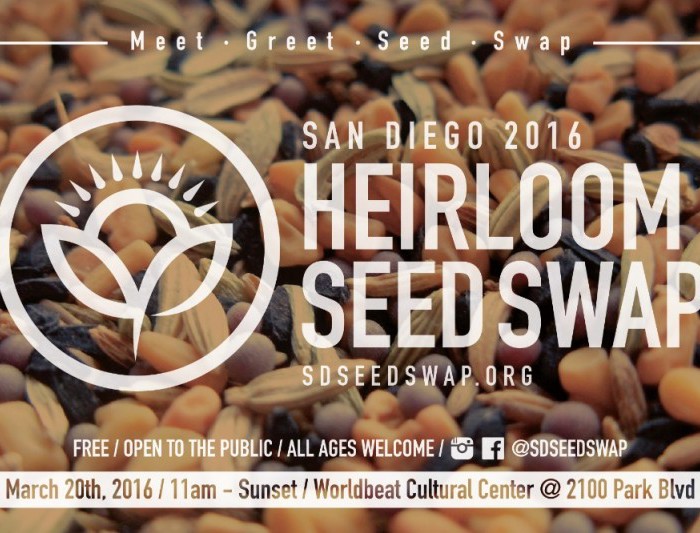 Seed Swap – How and Why

Seed Swap - How and Why

A Seed Swap can be big or small, simple or a great big party. The later is the case at the first annual seed swap in San Diego.

It all started with a conversation at the National Heirloom Expo in Santa Rosa, California. “How cool would it be to have a Seed Swap in San Diego,” Dale Tron said to a friend (or something like that). That friend liked the idea and told another friend. Then Dale told Nathan, Matt Powers was there when another friend was told and suddenly, that conversation became a plan and on March 20th, will become a reality.

In a very short time, the idea has grown into an event that brought people from more than 30 organization to the table. Many others have been inspired to volunteer their time, either at the event or for the preparations. Seed companies are donating seeds to be given to the public free of charge. Best of all, speakers and educators are traveling on their own dime – some from other states – to be part of this inaugural celebration. And that it is! The intention is to create a ceremony with drum circles in the beginning and at the end, to have music all day and provide space throughout the day for friends, old and new, create community together.

In celebration of the spring equinox, the San Diego Seed Swap, the Centro Cultural de la Raza, and the World Beat Cultural Center would like to present:

Pack your picnic baskets and join us in Balboa Park for a traditional seed swap on a grand scale! We will have live music, keynote speakers, garden workshops, and live demonstrations for all ages. Come take a peek at our heirloom seeds, edible rarities, and garden obscurities.

It is FREE & open to the public. Bring your heirloom seed to share!

Bring your surplus of non-GMO seeds to swap at the event. Check-in starts at 10:30a. Packaging your seed for trade ahead of time earns you bonus points!

Grab a blanket, load the kids up in the car, invite your family and friends, and join us as we celebrate spring!Invite your community to participate at this momentous event in the pure food movement.

We have a full afternoon of community exhibits, urban agriculture workshops, children’s activities and more!

Find out more about the San Diego event using the following links.

Create Your Own Local Seed Swap

Nathan and Dale encourage everybody throughout the podcast episode to start a seed swap of their own. This could be as small as starting to swap seeds with one neighbor. Or it could be a church, a school, a neighborhood or the whole city. The important thing is to start somewhere. Then tell a friend and tell that friend to pass it on.